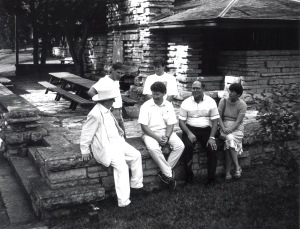 In just a year and a half during the Depression, Alfred Caldwell designed and built the landscape and buildings at an existing park overlooking the Mississippi River, Eagle Point Park, using federal funds under the Works Progress Administration.  Jens Jensen, in his letter to Dubuque recommending Alfred Caldwell, said he was a poet and a genius.

Sixty-four years later, Caldwell revisited the park and described how he built the park, training local men to be stonemasons and builders. The documentary reveals the lasting legacy of the park and the visitors who come to celebrate family, view the Mississippi, and enjoy nature.

Paul Finfer was a student of Mr. Caldwell at IIT. June Finfer completed this program in his memory.

Other programs about his work include Passionate Nature: The Chicago Parks of Alfred Caldwell,  and Creating Community: Lafayette Park.